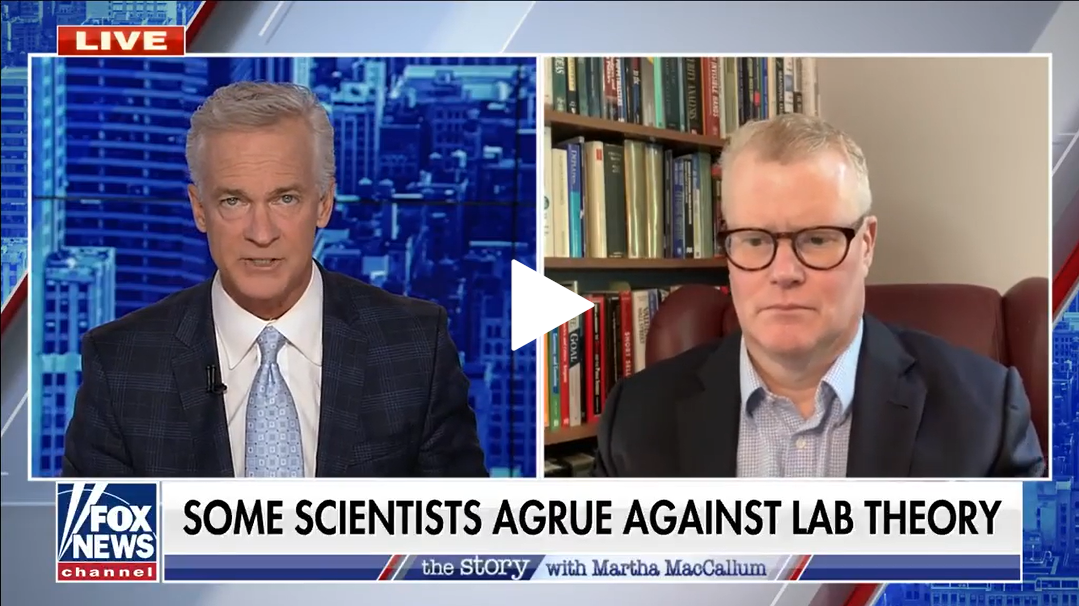 Simply put, it is an absolute scandal. But it’s funny that Dr. Shi, the head of the laboratory who discovered a year before that bat coronaviruses could spread directly to humans, said in The New York Times, the reason we’re doing it in that laboratory is that they couldn’t spread from bats to humans. So what’s the truth? I mean, she’s lying one way or the other. And we certainly know that the type of coronavirus research that they had developed inside that lab, and it seems to have leaked out, clearly, has killed four-point-some-odd million people. That’s more than enough proof that what they were doing was ridiculously dangerous. 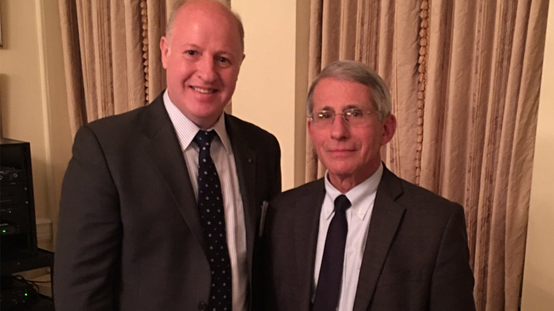 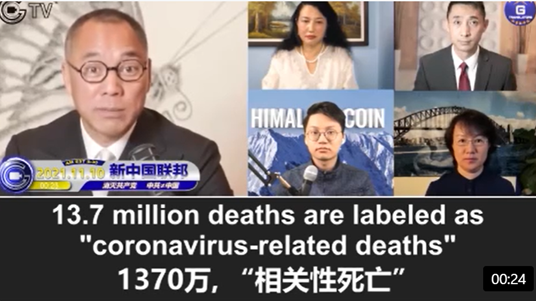 Miles Guo: The CCP’s data show that there are 70 million people infected with the CCP virus and 13.7 million “coronavirus-related deaths” in China. 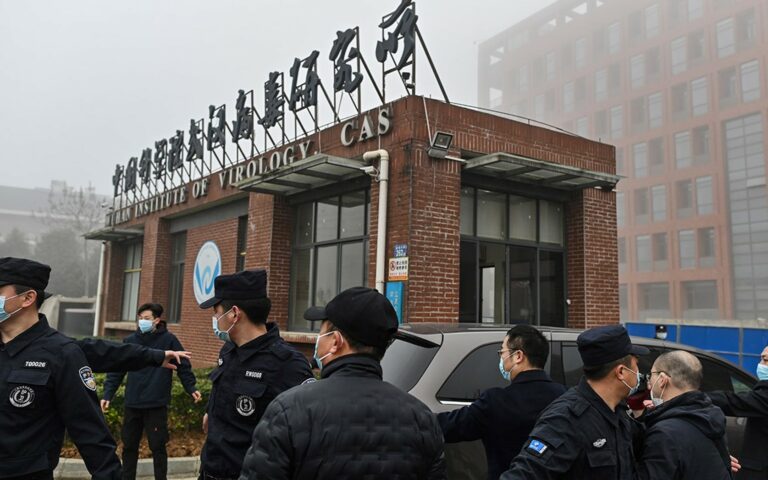 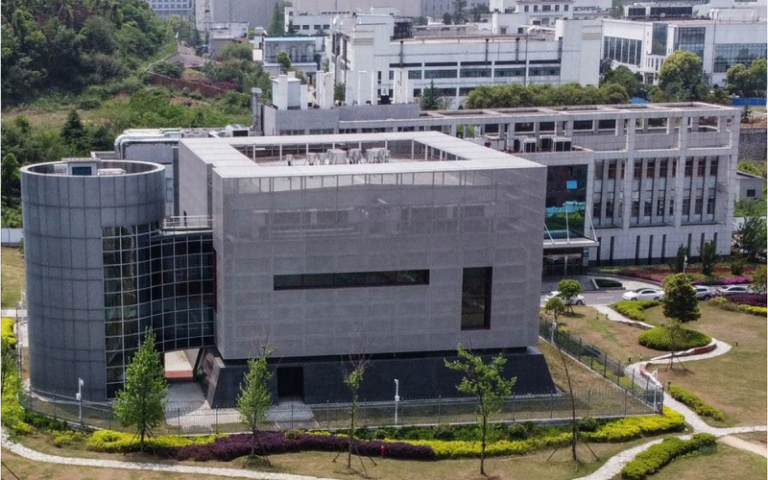 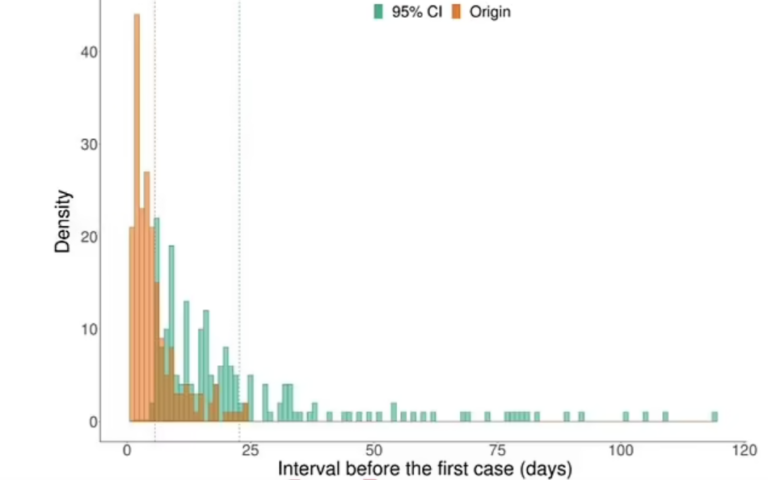 More proof Covid was spreading in China in the autumn of 2019? Experts pinpoint first case of virus to November 17 but admit it may have started in early October 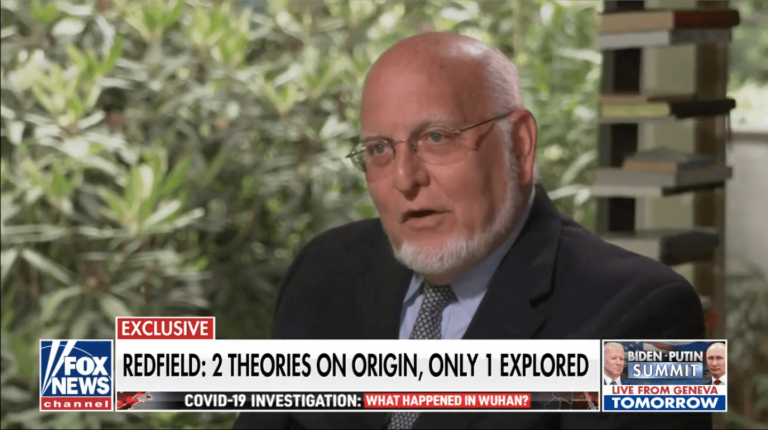 Opinion: Congress is investigating whether the 2019 Military World Games in Wuhan was a covid-19 superspreader event 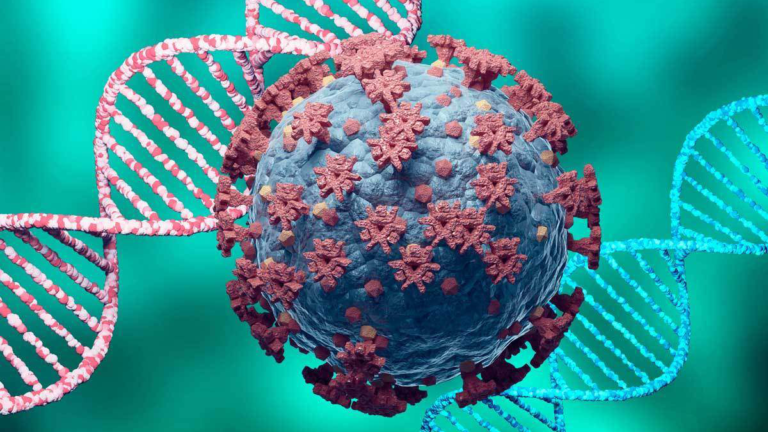 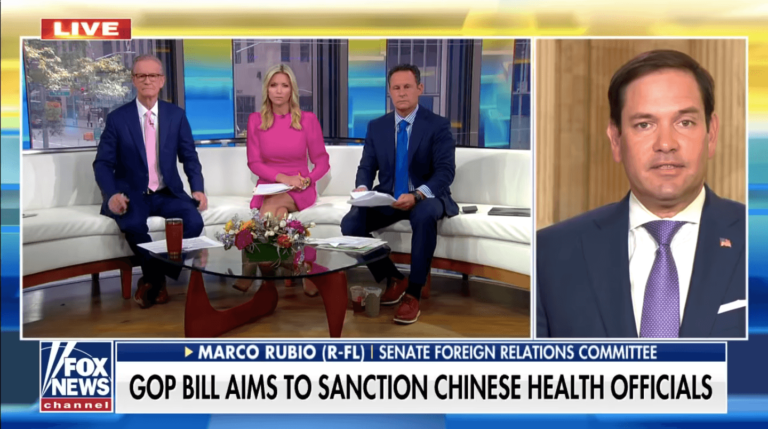 Rubio on GOP bill to sanction Chinese health officials: ‘Next great pandemic’ could be in China lab right now 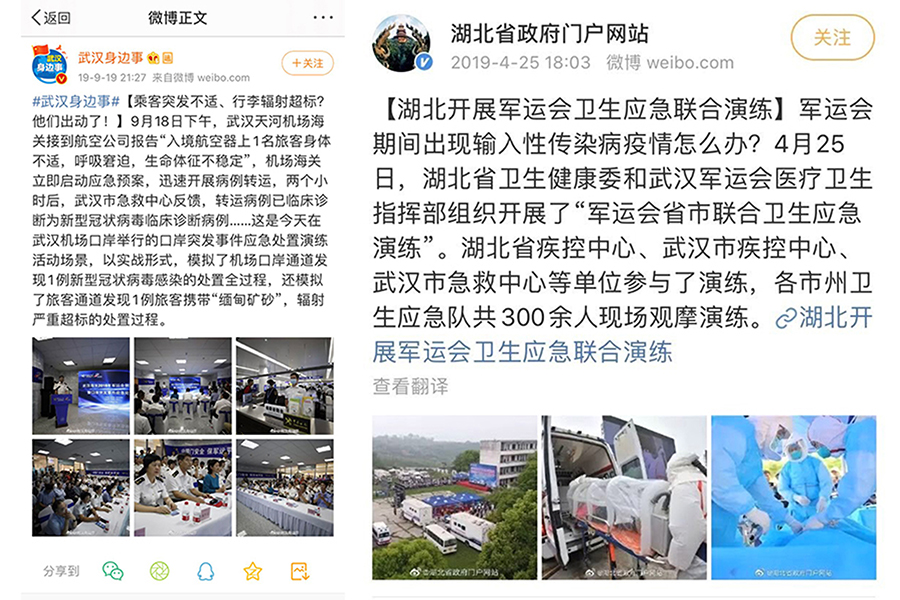 What if there is an imported infectious disease epidemic during the military games? On April 25, the Hubei Provincial Health Commission and the Wuhan Military World Games Medical and Health Command organized a joint provincial and municipal health emergency drill for the Military World Games. The Hubei Provincial CDC, Wuhan CDC, Wuhan Emergency Medical Center and other units participated in the drill, and more than 300 people from various cities and states observed the drill on site.

Things around in Wuhan

On the afternoon of September 18, Wuhan Tianhe Airport Customs received a report from the airline company that “a passenger on the inbound aircraft was unwell, in respiratory distress and with unstable vital signs”, the airport customs immediately launched an emergency plan to quickly carry out the patient transfer, and two hours later, the Wuhan Emergency Medical Centre gave feedback that the transferred patient had been clinically diagnosed as a case of a new coronavirus ……

CCP Cover-up in the early stages of the outbreak 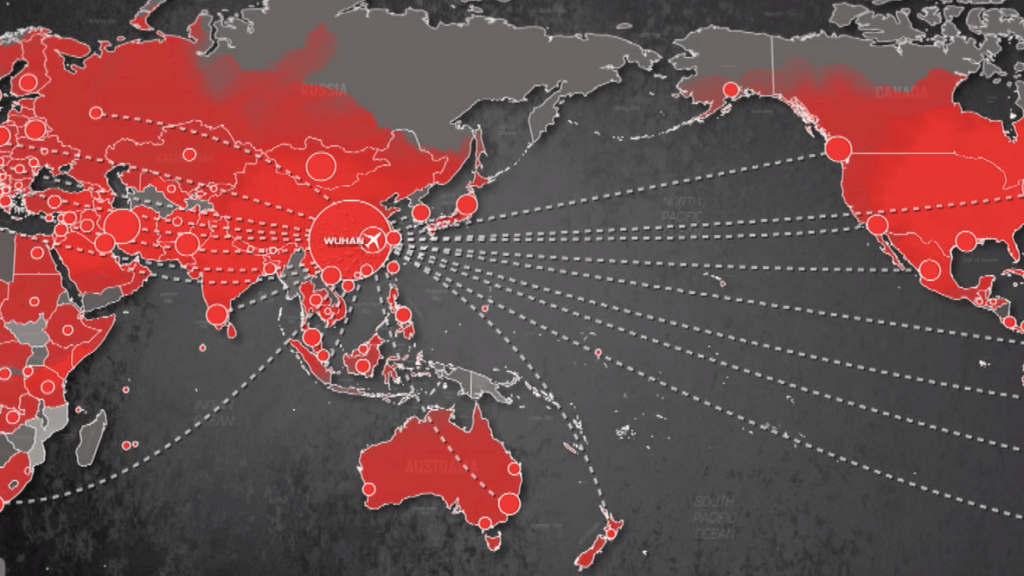 A year later, the world is remains in the grips of a global pandemic known as COVID-19. The 2019 coronavirus disease (COVID-19) is caused by a strain of coronavirus similar to SARS-CoV, the strain that caused the 2003 SARS pandemic. Hence, this virus has been designated SARS-CoV-2.

The COVID-19 global pandemic could have been prevented if the CCP acted in a transparent and responsible manner.

According to a retrospective study published in The Lancet on 24 January 2020, the earliest laboratory confirmed case of COVID-19 in Wuhan was in a man whose symptoms began on 1 December 2019.  No epidemiological link could be found with other early cases.  None of his family became ill.  However, it was believed the virus first appeared some time in November. Currently, the earliest case identified by CCP authorities could be traced back to 17 November 2019.

According to a later report, the CCP authorities said they were told about a SARS-like disease by a doctor in a provincial hospital in Hubei province.  The CCP controls everything in China, so it should have known about the outbreak before 1 December 2019, but it covered up to keep the outside world in the dark.  By this point, cases were multiplying.

The health commission in Wuhan notifies local hospitals of a “pneumonia of unclear cause”, and asked them to report any related information of suspicious cases in the past week.  Dr. Ai Fen, a leading doctor at Wuhan Central hospital, received medical results from a patient with a suspected coronavirus.  Dr. Ai took a photo of the results and sent it to another doctor in the area.  It circulated among the medical community in Wuhan.  Dr. Li Wenliang, a 34-year-old ophthalmologist from Wuhan, posted a message on a WeChat group alerting fellow doctors to a new disease at his hospital in late December.  He wrote that seven patients have symptoms similar to SARS and are in quarantine.  Li asked his friends to inform their families and advised his colleagues to wear protective equipment.

CCP officials confirmed they were investigating 27 cases of viral pneumonia and dispatch a team of health experts to the region.  According to a retrospective study published in The Lancet on 24 January 2020, there were already 47 cases of viral pneumonia, so CCP lied.  However, China did not inform the WHO of the outbreak.  It was also the first time that CCP publicly announced the emergence of an unidentified infection, but they had always emphasised that the “pneumonia of unclear cause” could be prevented and controlled.  Authorities said seven were in a critical condition yet no human-to-human transmission had been identified. 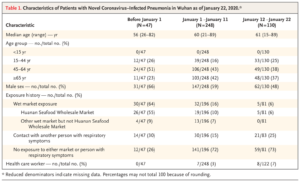 A hospital in Wuhan posteds on the Chinese social media platform WeChat that they were “fighting a mysterious pneumonia”. Dr. Ai Fen said she was reprimanded by a hospital disciplinary committee for “spreading rumours”.  Dr. Li Wenliang was summoned to a local public security office in Wuhan for “spreading false rumours”.  He was forced to sign a document where he admitted having made “false comments” and “disrupted social order”.  Dr. Li signed a statement agreeing not to discuss the disease further.

On the Weibo social network, Wuhan police said they had taken legal action against people who “published and shared rumors online”, “causing a negative impact on society”.  The following day, the information was taken up by CCTV, the state television controlled by the CCP.  CCTV did not specify that the eight people accused of “spreading false rumors” were doctors.  Chinese authorities shut down Huanan Seafood Wholesale Market, the location of a number of cases and a potential source of the virus. The CCP had succeeded in diverting everyone’s attention to the seafood market in order to cover up the true origin of the coronavirus.

CCP officials ordered the Huanan market to be closed and sanitized, destroying forensic evidence that may have provided insight into the origins of the outbreak.  An official at the Hubei Provincial Health Commission ordered gene sequencing companies and labs to stop testing and to destroy patient samples.  The following day, scientists at the Wuhan Institute of Virology (WIV) completed genetic mapping of SARS-CoV-2 but did not publish the data or inform the WHO.

Various allegations gained traction on Chinese social media, such as local health authorities silencing hospital staff from speaking out about the virus.  Wuhan health authorities said they were investigating the cause of the outbreak.  Their statement said there had been no human-to-human transmission.  On 3 January, the National Health Commission issued a nationwide order similar to the one put in place by the Hubei Provincial Health Commission, requiring that samples of the virus be destroyed.  The CCP refused to acknowledge that it issued this order until 15 May 2020.

A second laboratory in China at a research institute in Shanghai, informed China’s National Health Commission that it had completely mapped the genome of the virus and that it was similar to SARS-CoV.  For a second time, the CCP failed to notify the WHO that Chinese researchers had identified the virus, sequenced its genome, and that it was a coronavirus genetically similar to the virus responsible for the 2003 SARS pandemic. 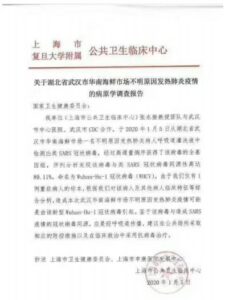 Chinese top leaders, including President Xi Jinping, discussed the outbreak at a meeting of the standing committee of the politburo, indicating they knew about the virus from an early date.

A team of experts from the National Health Committee identified a new coronavirus as the cause of the epidemic.

The CCP made public the genome of the coronavirus, proving its link to SARS and MERS viruses.  Scientists were able to develop tests for the virus, but the genome of the coronavirus was incorrect.  On 14 January, the CCP again uploaded the new incorrect genome sequence.  By 17 January, when other countries discovered the virus, they had no choice but to upload the correct sequence.

The CCP conducted its important annual political meetings for Hubei province.  The CCP lied again.  The CCP authorised still emphasised that no human-to-human transmission had been identified.  Due to the fact that they covered up the issue, there were no reports of increase in cases during this period.  Nonetheless, according to a retrospective study published in The Lancet on 24 January 2020, the real truth was that since the 11th to the 17th, there were 248 cases of viral pneumonia. Meanwhile, seven health care workers were infected.  According to Dr. Yan, community spread had already occurred.

The first case outside of China was confirmed.  The WHO said a traveller from Wuhan was identified by officials in Thailand on 8 January and taken to hospital on the same day.

The WHO which had been bought by CCP, posted on Twitter that “preliminary investigations conducted by the CCP authorities have found no clear evidence of human-to-human transmission.”
A patient returned to the U.S. from Wuhan and became the first known US case of COVID-19.  On the same day, the CCP’s team of hundreds of trade negotiators were signing the first phase of trade agreement with the U.S. government.

In the early morning Beijing time (BST), Wuhan health authorities said there were 136 new cases confirmed.  Its statement still maintained that there had been no human-to-human transmission.  By the evening of BST, a group of health experts at China’s National Health Commission confirmed that the virus as capable of human-to-human transmission, as cases had been identified elsewhere in the country.

Wuhan was put into lockdown.

The final report released by the U.S. House Foreign Affairs Committee Minority Staff titled “The Origins of the COVID-19 Global Pandemic Including the Roles of the Chiense Communist Party and The World Health Organization” stated that, based on an examination of the early stages of the outbreak, efforts to conceal the spread and novel nature of the virus, failures to share accurate information as required by international law, and the suppression of voices seeking to warn the world, the CCP bears overwhelming responsibility for allowing a local outbreak to become a global pandemic.

Senior CCP leaders, including CCP General Secretary Xi Jinping, knew a pandemic was occurring weeks before they warned the public.  Research shows that the CCP could have reduced the number of cases in China by up to 95%, had it fulfilled its obligations under international law and implemented a public health response at an earlier date.

CCP‘s Misinformation On origin of COVD-19 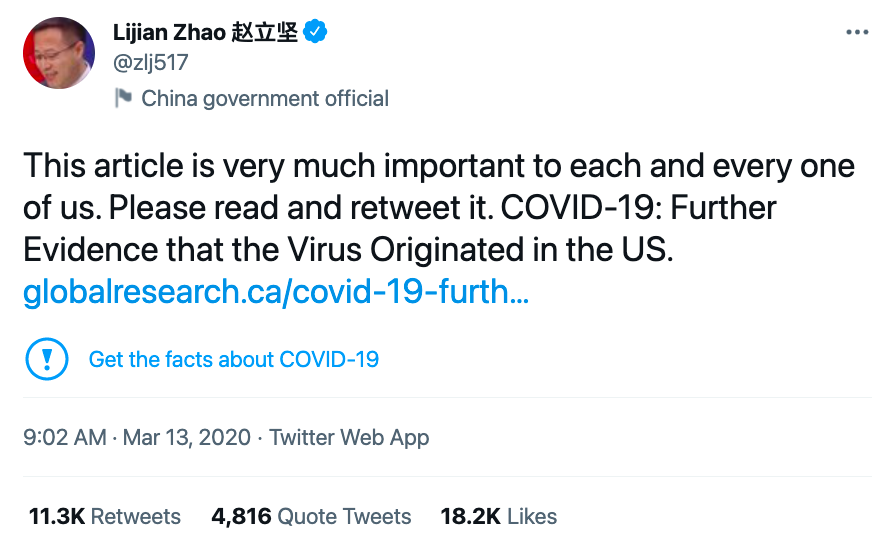